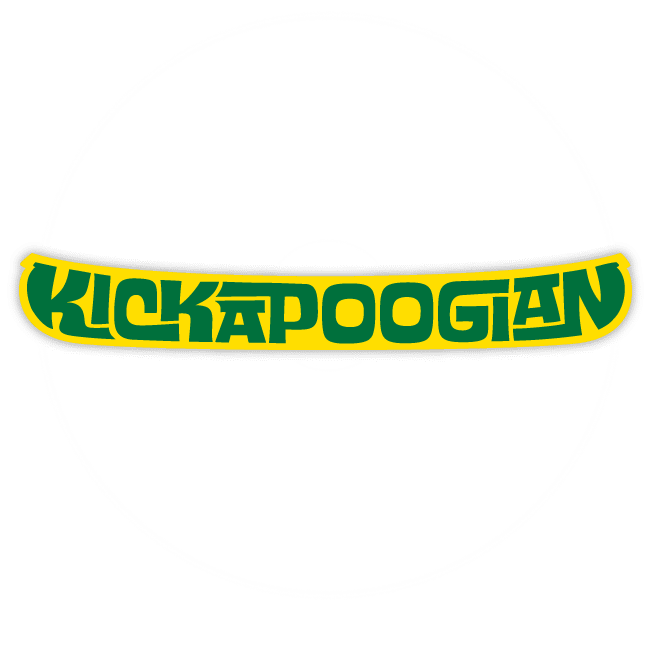 A Kickapoogian is anyone who calls the Kickapoo Valley home. An indigenous person of the Kickapoo Tribe is a Kickapoo.

The green and gold represent the color of the summer landscape of grasses, trees, and native flora such as grey-headed coneflower, cup plants, brown eyed susans, and several species of goldenrod. Packer colors are coincidental.

The term Kickapoogian, to the best of anyone's knowledge, was first printed in Ralph Nuzum's book, Here on the Kickapoo, in the early 20th century. Nuzum, and likely others, used the moniker to identify the people living in and around the Kickapoo Valley at the time. The people were mostly European-Americans.

The Kickapoo River was named after the Kickapoo people. The Kickapoo tribe came to the area in the mid-17th century from southeastern Michigan near Lake Erie as a result of the Iroquois War. Around this time, it was not unusual for European map makers to use names of native tribes for geographic place names.

In the early 18th century, the Kickapoo migrated south to Illinois. Many native American tribes, like the Kickapoo, were forcefully displaced by the westward expansion of European American settlers in the early 19th century. The Kickapoo tribe remains active today in Northeast Kansas and elsewhere. The Kickapoo people have their own traditions, history, culture, and language. We invite you to learn more at www.ktik-nsn.gov.

To clarify, Kickapoogian is NOT intended as a descriptor for a native American; doing so would be disrespectful and offensive to the Kickapoo, a people we respect.

In addition to the 7% of sales donated to benefit the driftless environment, shopdriftless.com donates an additional 50% of profits from sales of all Kickapoogian stickers and t-shirts to the Kickapoo Tribe in Kansas. We recognize that the indigenous peoples of the American continents were in tune with sustainable living, and it would be both courteous and wise to listen to their voices as we continue on our journey as one human race on one shared planet.